Would You Adopt a Wild Animal? A Sunday Rant. 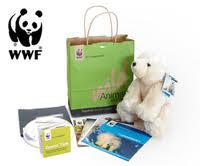 This year there has been a preponderance of Christmas adverts asking us adopt a Snow Leopard or a Polar Bear.

The WWF recently ran an advert on UK TV saying 'adopt one of OUR animals for £3 a month'. Who's animals? They don't belong to the WWF. And who gave them permission to offer them for adoption?

This is no more than ' charitable respectability' running a huge multi-national scam.

If I do decide to 'adopt' a wild animal, I want it to be delivered HERE, and I would require the WWF to hand over part of their fund-raising dosh to pay for it's upkeep. That's how adoption works Matey.

Imagine adopting a human baby, and having someone else look after it (or not), and having to pay-up, and being given a Cabbage Patch toy to play with instead. No, no, no.

The only animals that will benefit from these so-called 'adoptions' are of the human kind!

I have no problem with the WWF; I'm sure they do very good work. But offering wild animals for adoption, or paying to name a Whale, or buying some ridiculously distant star, is simply conning the gullible.

Far better to just hand over a few quid/bucks now and again; and forget all this 'adoption' malarkey. It's just a way of getting hold of your bank details, then bombarding you with begging letters until you end up screaming.