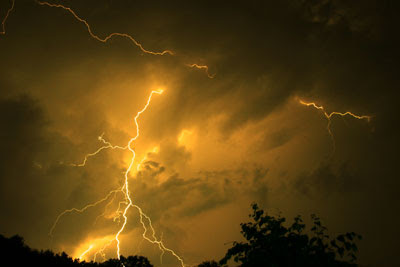 There is no question that our weather patterns are changing.

It used to be 'carved in stone' that in mid-August we would have a hum-dinger of a storm, which heralded the end of high-Summer.

They were powerful affairs. Lots of noise, lots of lightning, and usually a few blown-up bits of household electrical equipment. I've lost a fax machine, most of a stacking music centre, and several spot bulbs. I've also had streaks of lightning (probably 'static') running round the sitting room floor. Being without power for a day or so after a storm used to be common.

The bad side of these storms was loss of life. Not only were humans killed but also farm animals. We've had dead cows in the fields, as well as tall trees snapped in half.

But we haven't had these storms for several years. This year they were forecast quite regularly, but they never materialised.

There was something quite reassuring about our mid-August storms; they were almost as welcome as Christmas. You knew where you were with them, and they didn't let you down.

OK, they were quite frightening at times, and they occasionally left devastation in their wake. But like most meteorological extremes, they were pretty awesome (in the correct meaning of the word).