The subject that should never be broached. 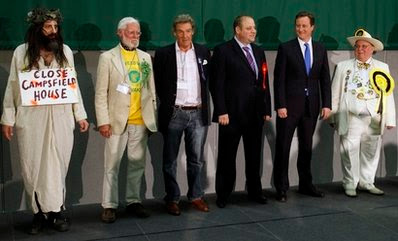 Above is a typical line-up of hopefuls at an English General Election. From the Left. 1. Bloke dressed as 'Jesus' with a bee in his bonnet about some unknown and unimportant (other than to him) subject. 2. Old codger who wants everyone to ride bikes and eat muesli. 3. Retired (or resting) actor who sees himself as another Schwarzenegger. 4. Fat Socialist. 5. Slim Conservative. 6. Monster Raving Loony Party bloke.

It's wherever you turn..... bloody politics. The older I get, the more disillusioned I become with the whole lot of them.

I don't vote any more, and I align myself with no particular party. I prefer to think of myself as a member of some Common Sense Union; drawing the best (i.e. the least disastrous) from each of the major parties.

The problem is that ALL mainstream political parties have been hijacked by 'lobbyists' from the PC, elf-n-safety, human rights, and arms-manufacturing brigades; when what's really needed is a strong intelligent figurehead who's not going to be pushed around.

If you're just about to vote, I hope you make the right choice; not necessarily for YOU, but for the rest of us! And please, let's not elect a bunch of barmy warmongering lying self-obsessed despots; there are enough of those around already.