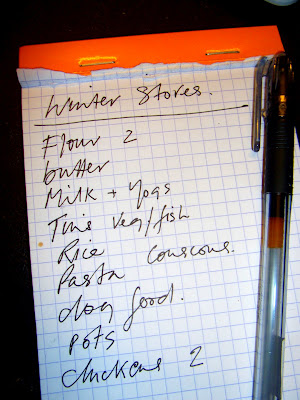 My people used to own a couple of cottages on the very top of a Welsh hill, where the risk of being snowed-in in winter was quite serious. Snow could drift so high against the doors, that it was impossible to leave. People who lived in the area were advised to keep about 2 weeks worth of food in their houses.

Last winter we experienced something similar here when the roads were so iced-up that, even if one's car would start (the Compact Royce wouldn't), it was impossible to drive.

A couple of months back, Lady Magnon suggested we prepare a survival kit list, just in case this winter should be similar to last. I don't think there's anything exceptional on the list; flour to make (soda) bread, plenty of pasta and potatoes, and a couple of chickens in the freezer.

Of course we already have quite a stock of home bottled, tomato based, conserves, and there are always several large tins of 'confit de canard', and small ones of paté, in the cupboard. Also, if we could make it as far as Haddock's, there are fresh vegetables too (as well as plenty in storage).

Above is the actual list we drew-up a couple of months back. The 'Tins Veg/Fish' refers to tinned peas and tuna in olive oil, without which I can barely survive.

Any further suggestions for the list would be welcome; and, by the way, I have since added 'industrial pack of bog paper'.