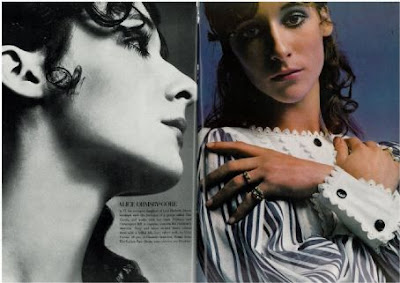 Money, fame, and beauty, would normally be regarded as the passport to happiness. But not so with certain families.

Back in the early 70's I spent a couple of months living at one of my people's cottages on top of a hill between England (Shropshire), and Wales (Powys). One of our near neighbours was Lord Harlech; his huge red brick Georgian mansion was just a stone's throw away.

Harlech had five children; Francis (the present Lord Harlech), Alice (above), Jane, Julian, and Victoria. They epitomised the era's fashion for the children of the privileged to indulge in a lifestyle of drug-fuelled carefree hippy-dom.

Harlech's children seemed to live the ideal life; London society during the week, and daddy's palatial pile at the weekend.

But life is not always how it seems. Julian shot himself in 1974, and dear Alice died of a massive heroin overdose in 1995; she was found with the syringe still in her arm.

Stress, pressure, expectation; who knows what drove them to despair. But a more perfect and privileged life would be difficult to imagine.

The loss of life of an 'aristo' is no more tragic than that of someone from the other end of the social circle, but, somehow,  it seems to be.