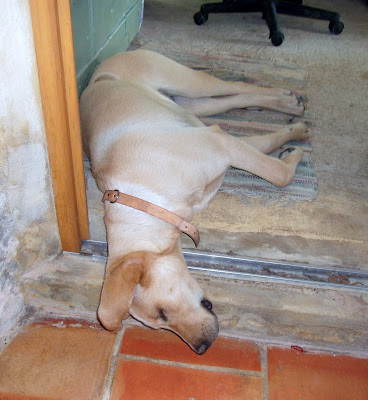 I haven't mentioned our new 'puppy', Monty, for a while. He's now 5 months old, he weighs much the same as a small car, and behaves like a typical ungainly youf.

He refuses to come when called, he eats like a horse (we're not sure he isn't one), and sleeps on my sofa at night after having been given strict instructions not to.

His favourite things to eat are horse manure, cow manure, and anything else he finds lying around. He doesn't feel properly dressed without a stick or ball in his mouth, and he still pees in the more bitch-like squatting position.

He's commited no serious misdemeanors up till now. He's had to be disciplined on occasions, but that's normal; I'd worry about him if he hadn't. So, I think we'll be keeping him; even if he does sleep like a Friday night drunk!

p.s. Ms Tadpole at the rescue center omitted to tell us that Labradors FART. So be warned; if you're thinking of getting a Lab' pup, place its basket by an open window.