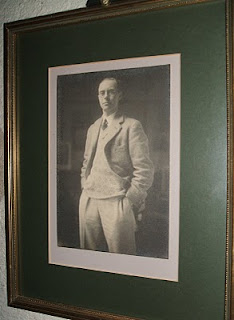 Today's the day when we all think of our fathers; those that are still with us, and those that are not.
My father died about 30 years ago. His interests were mostly concerned with the making of money, and going for long weekend walks with my Uncle John. He was not a gregarious man, but was very generous both to his family, and to everyone who worked for him.
I don't remember my father ever playing cricket or football with me; he just wasn't that type. And frankly, he was probably at his most relaxed when my sister and I were away at school; which (as children) we were most of the time.
I'm pretty sure that 'fatherhood' confused him. I don't think anyone had ever told him how a 'father' was supposed to act. He would never have been seen making a fool of himself (something I do often with my own children and grandchildren), nor would he ever have expressed any form of emotion.
Father was a traditional father; you always knew where you stood with him.
So belatedly, I thank him for having given me a really great start in life; I suppose I should have said that when he was still alive, but it never crossed my mind.
Posted by Cro Magnon at 05:27