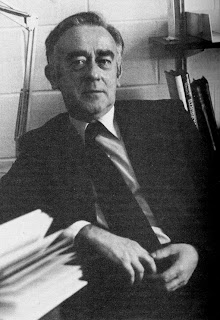 My relationship to this great man is so obscure and distant that I can hardly claim him as 'family'.

But, Islwyn Ffowc-Elis (of Wrexham) was my late mother's cousin, and as I have at least two blog-followers who hail from 'God's own country of Wales', I offer this simply as a matter of interest.

Islwyn's protagonists claim him to be Wales's most important writer 'ever' in the Welsh language (Dylan Thomas wrote in English). He was translated into several other languages, although I have never, myself, ever read a single word that he wrote; maybe I should!

In 1959, 1962, and 1964, he stood as the parliamentary candidate for 'Plaid Cymru (Welsh Nationalist Party) for Montgomeryshire , but failed dismally at each attempt (not surprising). He also became a Presbyterian Minister in 1950 (poor soul), but the less said about that the better.

That's it. That's Islwyn for you! If you're interested in Welsh literature, do feel free to look him up! I believe his books are still available; mostly, of course, are in WELSH. He died in 2004, and I rather regret that we never met.

p.s. Originally his family name was Ffoulkes-Ellis, but being a staunch Welsh Nationalist he changed it to the more authentic sounding Ffowc-Elis. I wonder if anyone noticed; or even really cared?
Posted by Cro Magnon at 05:46