Has Cro Lost His Marbles? 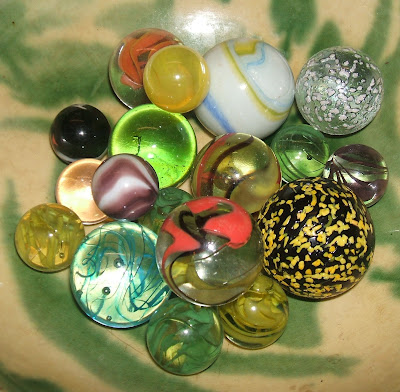 I bought these for my grandsons last summer, but could hardly face the idea of parting with them.

I feared that they would immediately be lost, so initially I gave them just ONE EACH. The next time I saw the boys (a few seconds later) both marbles had already gone, so I now feel vilified in having put the remainders aside.

Back in a loft in the UK I have a small collection of 'antique' marbles. These modern ones are not particularly well made, but they are still very beautiful objects.

I've always viewed marbles as a tiny example of man's control of nature. First, dig some sand.... etc.
Posted by Cro Magnon at 05:22