My Mother and Blaise Pascal (actually, his wager) 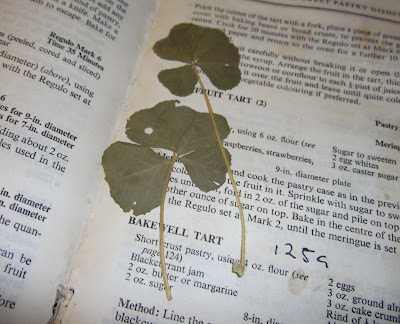 Mybabyjohn, over at 'thefeatherednest', recently posted a piece about things she'd found in an old family prayer book, and it reminded me at once of my late mother.

Almost every book my mother owned was filled with 4 leaf clovers. Her cook books (above), driving licence, and diaries; all were stuffed full with hundreds of them.

Personally I never find them (they seem to avoid me), but on walks with my mother, she would suddenly stop, bend down, and pick one or several. She used to say that she never looked for them; they simply stared up at her, and said 'pick me'!

Once, whilst discussing the possibility of an 'afterlife', we both agreed that the concept was vaguely amusing yet highly unlikely. However she did end the conversation by saying that if (after her demise) by some bizarre chance she discovered that such a thing DID exist, she would let me know by appearing to me in the form of a 4 leaf clover.

I have to confirm that, until this moment, no such appearance has materialised!
Posted by Cro Magnon at 05:33