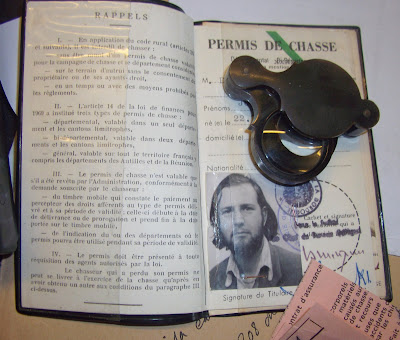 I can hardly believe that the French authorities once let me wander afoot with a shotgun over my arm. If that scruffy apeth (above) had come into MY office asking for a shotgun licence, I'd have told him to get lost.

Most of France is very heavily wooded; the South West particularly so. Wild Boar and Roe Deer abound, but for the dedicated 'chasseur' there isn't much else. In the winter there are flocks of passing Palombe (wood pigeon), but that's about it. My hunting days here, surprisingly, produced almost next to nothing for the pot.

About 40 years ago, when I still did a bit of shooting in the UK, an afternoon would bag pheasants, pigeons, and rabbits, by the truck load. But here, in an area that still looks so ideal for wildlife, there is little to be had, outside of an organised, dog-led, weekend sweep.

Many years ago I loaned my shotgun to a Dutch chef, he then died and the gun disappeared; I haven't shot since. Frankly I'm not fussed; nowadays I'd rather look at it that shoot it!

The amazing thing is that (through all those intervening years) I haven't changed one bit!