The young militant woke LGBT brigade seem to think they are avant-garde trendsetters, and that the rest of the world needs to wake up to their radical new, never seen before, life-styles.
Well let me point them to April Ashley (below). Ms Ashley was born in 1935, and had reassignment surgery in Morocco in 1960. She soon became a much sought-after model but after having been maliciously 'outed' as having had a sex change, much of her work stopped. She had been photographed by David Bailey amongst others. 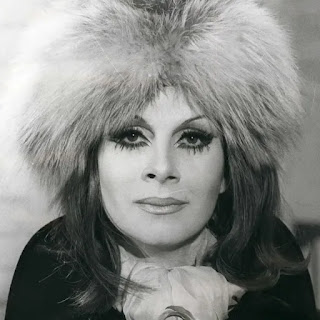 She was a good friend of Dali's muse Amanda Lear, and claims that they worked together in drag bars in Paris during the late 50's. Ms Lear has always claimed (and still does) that she was born female, but evidence proves otherwise.
April became big news in the early 60's. Her story was new, such 'things' were not common knowledge back in those dark days. I do remember the headlines, but I don't remember any criticism or anti sex-change banter. It simply was what it was.
She later received an MBE for 'services to transgender equality'. Good for her!
Posted by Cro Magnon at 05:36