I'm sure I've mentioned previously that in France 'lunch' is generally known as 'La Soupe'; basically, because that's what it is.
In my neck of the French woods, soup means one of two types, one with bread and the other with Vermicelli. Both start life much the same. 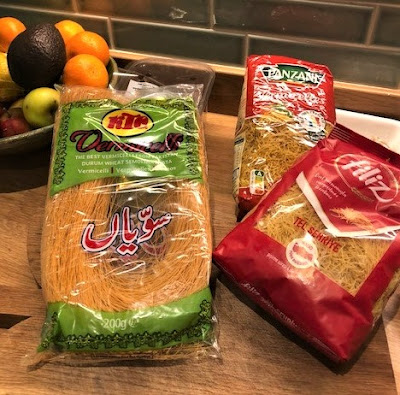 A decent amount of crushed or sliced Garlic is sauteed in duck fat, Chicken stock added, and the seasoning adjusted to taste. If making the bread version, thick slices of good stale country bread are laid on top and cooked for a short while. The soup is then left until required, when it would be reheated. The bread becomes gelatinous and delicious, don't try it with Mother's Pride!
If making the Vermicelli version, the soup is prepared as above, then left until lunchtime when the Vermicelli is added about 5 mins before serving. Both soups are delicious and are standard fare chez Cro. The amount of Vermicelli added is a matter of taste.
As with most things I like to have a good selection of pastas, so my Vermicelli comes from France, Turkey, and (thanks to Kimbo) Pakistan (above). All is good, and all is used for roughly the same purpose, although the Pakistani version does have a sweet recipe on the pack, which I wouldn't try!
I remember in Shropshire back in the 80's, my mother was off to visit our local deli, so I asked her to buy some Vermicelli; she returned with a bag of thin chocolate worms. Not what I was after.
Posted by Cro Magnon at 05:43