In these financially difficult times, what the country needs LEAST is being brought to a standstill by a bunch of junior layabout anarchists (The Corbyn brothers et al). 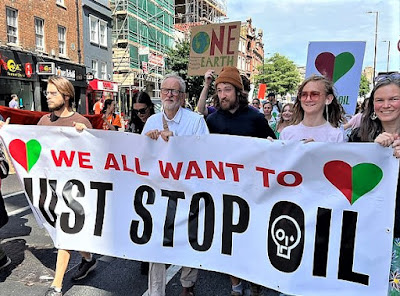 Ill-advised groups such as 'Just Stop Oil', CND, and 'Insulate Britain', have joined forces with the usual rabble, including ASLEF RMT and the Corbyn Bros, to attempt to bring central London to a standstill (as one does).
They were moaning about low wages, the cost of living, and the climate crisis, and this was how they hoped to solve it.
However, I'm not sure how disrupting life in London will help with the cost of living, nor am I sure how it would tackle the climate crisis. Perhaps they know something that the great majority of the world's population don't. Also, how pouring a bucket of mixed human faeces/urine over Sir Tom Moore's new memorial will help their cause is anyone's guess!
What I do know however, is that if either Jeremy or his conspiracy theorist brother Piers Corbyn are leading some silly march, then it's bound to be nonsensical and/or illogical. 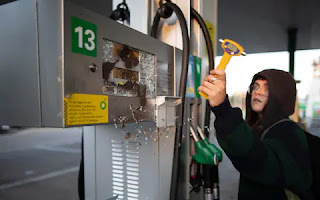 N.B. Just as a matter of interest, the marching lovies might like to know that a standard 42 Gallon barrel of crude oil creates not only about 20 Gallons of petrol, but a 22 Gallon residue that goes towards products as diverse as car tyres, deodorant, paint, insect repellent, guitar strings, telephones, golf balls, and even heart valves. Let them tell me that they never use any of these. The hypocrites!
Oh, and by the way Jeremy; that big plastic banner you're holding is an oil by-product. Tut tut!
It kinda makes their silly marching look rather uninformed and irresponsible.
Posted by Cro Magnon at 05:59