I would best describe my gardening style as 'Jungle'. I plant things that grow vigorously, then attempt to tame them later when they become unruly.
One of my favourite infill trees are Figs; I think I have nine trees in all. They have beautiful glossy leaves, they are impossible to kill, and they produce lots of fruit. For someone with my lack of gardening knowledge they are ideal. However, they do grow very quickly, and every year in mid-Summer they need to be pruned.
This one below, beside the pool, has gone really crazy this year. I removed about four huge wheelbarrow loads of branches and leaves from the lower half. If you can imagine the lower half as having been much the same as the upper half; you'll have a good idea of what I removed. It looks much more 'airy' now; before it was one big bush. Now it has legs. 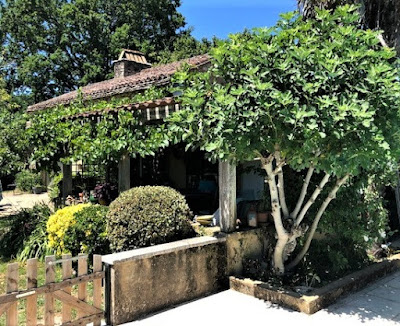 I've also been back up the Palm Tree again. I decided to lop off some of the dead fronds. I rather liked the scruffiness of them, but they were causing too much shade. I shall do the same to the smaller one on the other side of the pool. 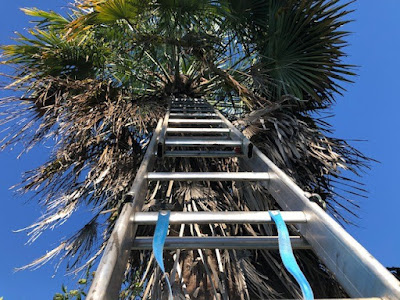 I'm not a gardener in the true sense of the word; I'm more of a planter and tidier. However, I do have an aesthetic eye, and that helps.
With the current heatwave, the grass is no longer growing, and everywhere is turning 'Summer Beige'. This gives me more time for snipping and sawing. All my work is done before 9 am.
Posted by Cro Magnon at 04:43