A Cat by Moonlight.

Trying to take a night-time photo of the moon with a mobile phone is not easy; but it'll give you a rough idea.
The recent full moon has been spectacular here. With cloudless skies it has resulted in such bright moonlight that it could almost have been sunlight. This picture (below) was taken at 5 am, and it was much lighter than it looks.
Whilst moon-watching (from indoors) I noticed that one of our movement activated lights had turned itself on. It was a Cat wandering around and sniffing at things. I turned on the outdoor light to see whose Cat it was, but I didn't recognise it. It didn't run away so I was able to watch it from inside the kitchen. I'm told there are some wild (feral) Cats around, so maybe this was one.
I'm happy to have Cats around, especially if they put the bejeezus up the local Mouse population. No doubt Cats enjoy a full moon as much as we do. 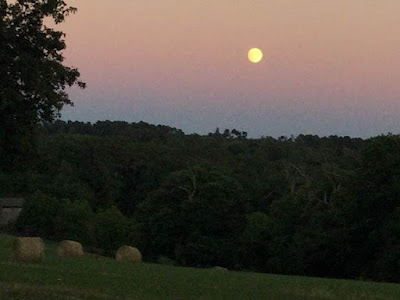 I've now swapped my photo for one of Lady M's; so much better than mine!
Posted by Cro Magnon at 04:35