The Dumbing-Down of Lord's. 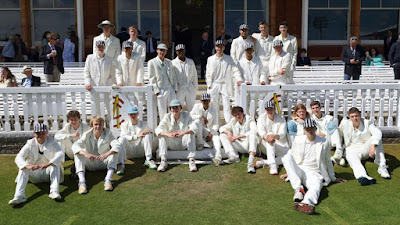 For those who know little or nothing of Cricket, the Lord's ground in St John's Wood, N W London is its spiritual home. It is in fact the home of the Marylebone Cricket Club, but is named after its founder Thomas Lord. The ground was opened in 1814.

Lord's is where all the country's most important Cricket matches are played. Test matches, County finals, and even prestigious School and University matches.

One particular schools match has been played there since its foundation, but was actually already being played ten years earlier. It involves Boris Johnson's old school against that of another Prime Minister, Winston Churchill. The two schools have always been sporting opponents. This annual 'grudge match' has been fought over since 1805.

The MCC, in their superior wisdom, have now decided that in the name of egalitarianism, this match will no longer be played at Lord's. Instead they have instigated a Twenty/20 match which will be open to all Secondary Schools, with the final being played at Lord's instead of the one played for the past two centuries.

The traditional 200 year old annual match will, of course, continue and in future will be played at the Wormsley Estate in Oxfordshire; in fact the site of their very first rivalry match back in 1805, which featured Lord Byron.

All I can add is that I do hope that both these schools will also take part in the new competition, and do well enough to face each other in the final. Otherwise the last game of its sort was played just a few days ago on June 28th 2022. Churchill's alma mater won!

I wonder if they are planning to stop the annual Oxbridge match as well? The Boat Race maybe? Where will this 'egalitarian' dumbing-down stop?