There are several trees that are essential to any orchard, a Bramley cooking Apple, a Victoria Plum tree, and a Cox's Orange Pippin.
The French have always been 'funny' about English Apples and Plums. They much prefer their own varieties and hate to admit that anything from north of the channel could be better. 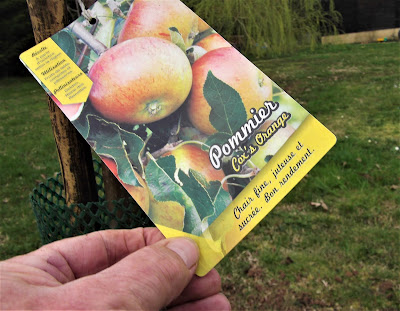 We already have a Bramley down by the pool, and we have had a Cox previously which sadly died from Honey Fungus, but I have yet to find a Victoria plum over here, so we have the next best French variety, which is a very poor cousin. Both the Bramley and the Cox were secretly imported from Blighty.
I was quite surprised to find this tree yesterday, and 'snapped it up'. It's been about 20 years since our last one died, and we've really missed it. Cox's do not appear on supermarket shelves.
England is a great country for both Apples and Plums, and France is probably the best for Pears; and let no-one tell you differently.
Give it a few years and we'll be eating Cox's again.... or at least Boo Boo and The Cherub will.
Posted by Cro Magnon at 04:21