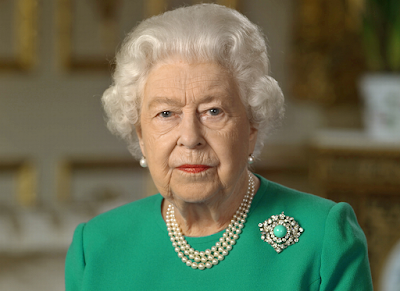 H M The Queen is under attack, not only from within, but from an ever increasing group of left-wing 'woke' activists elsewhere; not least of which is the French satirical magazine Charlie Hebdo. She is often spoken of as an unnecessary appendage to the British economy and taxpayer; which of course is rubbish.

I am posting this simply for the benefit of some 'foreigners' who may have been fed (or are being fed) a totally false picture of Her Majesty.

Queen Elizabeth II has been on the throne since the age of 25; nearly 70 years, and has never put a foot wrong. She has been an exemplary monarch, and a perfect example of 'regal behaviour'.

Last year she performed 296 official engagements, and welcomed 139,000 guests to Royal residences for banquets, etc. As Head of the Commonwealth she also spent an inordinate amount of time on foreign affairs. She's one busy gal.

Anti-Royalists often claim that she lives a life of luxury on the backs of British taxpayers; the truth is quite different. In fact, many of the usual Moaning-Minnie anti-royals are more than likely actually living off the back of The Queen.

The Queen's private income is known as The Crown Estate; ALL of which is handed over to the government, in the form of an 'exchange'. In recent times this has amounted to around £300 Million. In return she is awarded a living allowance, known as The Sovereign Grant; roughly 25% of her estate. Recently this has been around £80 Million.

The Sovereign Grant is managed by the Keeper (and Deputy Keeper) of the Privy Purse, and goes to pay for everything from her stamp collection, her clothing, running her private properties, her page boys, Royal Ascot, and just about everything else that Her Majesty owns, buys, employs, or controls. She may be asked to approve of the spending, but she does not administer it.

The UK's coffers benefit to the tune of about £220 Million annually. Hardly a drain on the anti-royal taxpayers, as some would have you believe!

I must admit that I haven't seen one minute of 'The Crown' TV soap, but I've heard that it presents a very twisted view of the Royal Family. I was 7 years old at the time of Elizabeth II's coronation, so she has been My Queen for most of my life. It saddens me hugely that a young naïve 'foreigner' now sees fit to criticise her, and insult the historic institution she represents.

She should just be grateful that Henry VIII isn't still around.

I don't wish to see a President Corbyn replacing the monarchy. The present system has worked extremely well, so let's celebrate the fact that the UK has one of the most admired Royal houses in the world, and repel those republicans who wish to bring it down. The world is in enough turmoil as it is, let's not add to it.

And, although one may not believe it after Charlie Hebdo's current edition; Her Majesty is much loved here in France too.