The 1st of Spring.

You'd almost think that yesterday was the 1st of April, not the 1st day of Spring; it would certainly be more befitting of the bizarre behaviour we're witnessing from the EU bigwigs (bigheads). 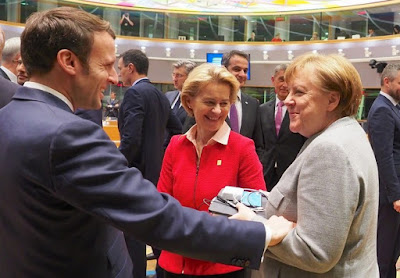 Macron, Merkel, and von der Leyen, have got together in an attempt to collectively punish the UK for their efficiency over its vaccine programme. Their bitterness is overwhelming.
The French Pasteur Institute's attempt at a vaccine was a total flop and was abandoned, whilst that of the Anglo/Swedish Astra-Zeneca went ahead as planned and has proved extremely effective. Macron's immediate response to this was to say it was dangerous, didn't work, and caused 'blood clots'.
Well, he would say that, wouldn't he! As a result, the French are now very suspicious of any vaccine; especially the Astra-Zeneca one. Some surveys say that 70% of the French will refuse to be vaccinated.
In amongst all their jealousy, and foot-stamping, they now say they won't allow the UK to receive their June 2020 order of 19 Million doses from their factory in Belgium, and they now wish to keep everything for themselves..... and boy, do they need it. A 3rd wave of Covid-19 has become rampant throughout Europe; possibly as a result of their dire vaccination and lockdown programmes.
So, surely, the question must be this, if the Astra-Zeneca vaccine is so flawed and dangerous, why on earth would they wish to keep it away from the rightful owners, then use it themselves to put their own citizens in such awful danger?
When Brussels next asks the UK for the £20 Billion EU divorce payment, I sincerely hope that Boris tells them to eff-off.
Macron, Merkel, and von der Leyen, even give 'knavery' a bad name. What scoundrels!
We can personally confirm that the vaccination programme, here in France, is a total disaster.
Posted by Cro Magnon at 04:27