It's a strange thing that The Royal Family were getting along quite well before Meghan arrived on the scene. One really has to wonder what changed all that.
Yes, they're still in the bloody news.
I know I'm not alone in wishing that Mr and Mrs Sussex (or whatever they now call themselves) would simply settle down, shut-up, go and make themselves lots of money, and do what they'd originally told us they wished to do; which was to live a quiet life away from their Royal duties, and away from the horrid, horrid, beastly, UK press. 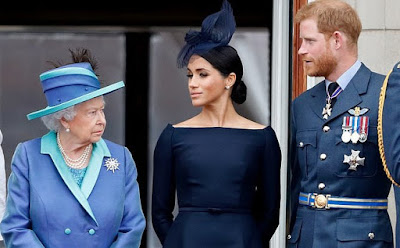 Harry has been enjoying his new-found privacy by riding around in an open-top Hollywood bus (mentioning Netflix 3 times), and jointly spilling beans to Oprah in a 2 hour 'primetime special'. Obviously keeping themselves out of the limelight.
Meghan, unfortunately, has been making exactly the same mistake as Harry's late mother, seeing herself as the headline, rather than the support act. She, also, like Harry's mother should have understood that she was simply a consort and not the 'big banana'.
Harry claims that he is able to cope with his separation from the Royal Family because he has Meghan by his side; and claims that his mother had had no such support, and had "gone through the process by herself". I think they've been keeping a few details from you dear boy!
It's far too late for advice now. Pre her wedding she was very popular in the UK,  but after the wedding she should have stayed in the background, perhaps adopted a couple of good causes, maybe continued with her acting career, and left Harry to be the star of the show, then none of this nonsense would have happened.
People were bemused by her inviting so many Hollywood stars to her very expensive wedding. Most she had never met; others only briefly. It's this constantly searching for the limelight that has made her unpopular; people don't like that in England. England is not Hollywood. It's simply not 'British'.
She got what she wanted. She married her Prince, returned to Hollywood, and has her heir and spare (almost). The one thing they both now owe to HM The Queen, is some respect; and possibly to Markle's own family as well. Is there anyone she hasn't yet upset?
Her Majesty has behaved impeccably throughout her life. She's never dressed in Nazi costumes, never wandered around naked at Las Vegas parties, and, above all, she is Harry's grandmother. So would you now both behave yourselves, and shut-up!
Meghan comes from a pretty ordinary background, she was a divorcee, a bit-part actress in a cheap soap, and frankly knew absolutely nothing of the duties and expectations of The Royal Family. Why she thinks she can now admonish them for not behaving correctly, is a mystery. Obviously she thinks she knows best.
And one more thing. Would you please now stop calling yourselves the Duke and Duchess of Sussex. I don't suppose you've ever been to god's playground, and Meghan probably doesn't even know where Sussex is.
Posted by Cro Magnon at 05:24