The Sad Tale of Puffin. 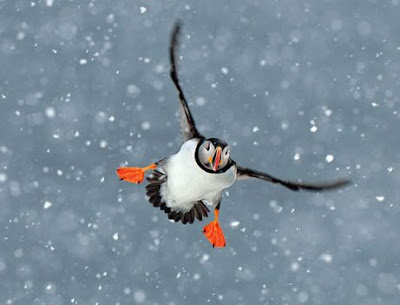 We used to have a friend called 'Puffin'. He was a rather solitary person; not particularly forthcoming or gregarious. He worked in 'the arts' as an illustrator or maybe photographer, I'm not sure which.

Puffin lived at the top of our road in Brighton, overlooking the old church. He had a pleasant home, a pleasant wife, and pleasant kids. In fact his life seemed very 'pleasant' in all respects.

One day it all fell apart; we knew nothing of the reason; nor did we wish to. Then came divorce, loss of his home, alcohol, even begging on the street. He once even asked me for a pound, which I was happy to provide.

I don't quite know what happened to him after that, but I would often see him wandering aimlessly around town, as his then ex-wife remained in the family home, and took a job in a well-known high street store.

Puffin took to travelling on busses. Finally, one day on a No 7 bus, he died. People simply thought he was asleep, as the bus went round and round its daily circuit.

Yes; he died on a No 7 bus, and no-one noticed! Not waving but drowning? No, not sleeping but dead.... Poor old Puffin. RIP.