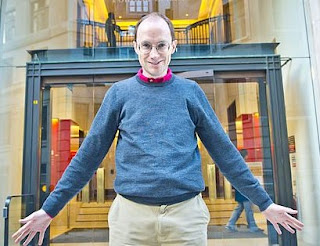 Where DO they find them?

Tim Leunig (above) is described as a 'Powerful Treasury Advisor'.

His latest 'advice' is that 'Agriculture and Fishing are not critically important to the UK's economy', and that the UK could be like Singapore and import all its requirements.

I don't know how much Leunig is being paid for such words of wisdom, but allow me to give some alternative advice for nothing.

People in the UK are very food conscious. They like to know exactly where their food comes from, and they like it to be as unpolluted as possible. If organic foods cost exactly the same as chemically-encouraged foods, there would be no question which the public would choose.

Already there are fears across the UK that Chlorinated Chicken from the USA will soon be on our supermarket shelves; and they don't like it.

So we must ignore the advice of Loony Leunig, and insist that the UK remains a strong, government supported, farming and fishing nation.

At a time when the UK is becoming increasingly aware of organic growing methods, and more people are becoming either Veggie or Vegan, people want to know exactly where their food comes from, how it was grown, and be assured that our food standards are kept higher than those of most other countries. It is highly irresponsible of Leunig to suggest anything else.

If a senior civil servant suggested anything similar here in France, farmers would take to the streets instantly. Barricades would be erected, shotguns loaded, and the guillotine sharpened.