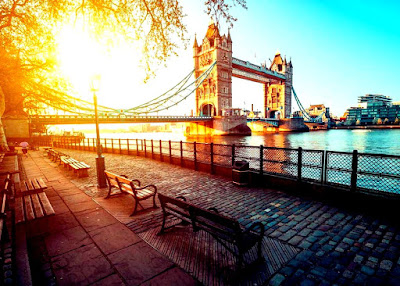 I would like to suggest that all UK school leavers, or graduates, go to live in London for a few years. Not Croydon or Pinner, but central London, where it all happens.

Personally I spent 6 months commuting before moving up to town. Those post-school six months of early trains and very late nights were debilitating. Once I'd found my first bed-sit (in Bayswater) my life changed dramatically, and in many ways I was obliged to become an 'adult'.

London is a great city, and being a part of it is an education in itself. I was lucky to have lived there in the mid to late 60's when 'Swinging London' was at its peak, but everyone's experience of London is wonderful, whenever they live there.

I met fascinating people, did amazing things, and experienced so much that would otherwise have passed me by. Not everything was 'positive'; I was mugged, given rubber cheques, and encountered some horrendous landlords, but generally life was good. Some of my greatest memories are of Sundays, when I would either cycle around town, take busses, or simply walk along the embankment.

Of my three children, just the two boys have lived in town. My oldest currently in Kensington, and my youngest recently in Holland Park. My daughter decided that Oz was more to her taste, and intends to remain there.

Education comes in two parts. Firstly it's all about Ox bow lakes, Latin verbs, and Pythagoras. Then later (and I think more importantly) it's all about LIFE; and learning about LIFE cannot be better accomplished than in that great institution called London.