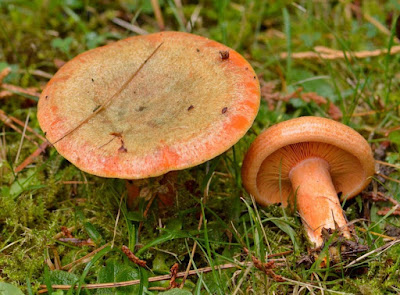 I was in the woods recently when I came across a portly Frenchman with a Gallic moustache, a very wide beret, and an even wider basket containing just two greeny-orange mushrooms.

"Too dry!" he replied knowingly.

"Yes, we could do with some rain" I said, even though I knew we'd had plenty in the past few days.

"Seen any of these about?" he asked me, holding one aloft.

"There's quite a patch of them down there" I said, pointing to a semi-overgrown path behind him.

He looked at me with an air of superiority, in that way that certain natives have of looking at aliens. Again he lifted one of the mushrooms from his basket, "What do you call these?" he asked, in a sneering fashion; obviously expecting me to shrug my shoulders and say "Dunno".

"Well" I began "Back in my own country they're known as Saffron Milk Caps (my translation may not have been 100% perfect), but personally I always call them 'Lactaires', after the Latin name of Lactarius deliciosus".

He looked at me with even more suspicion, and without saying another word, sloped off grumpily towards the path I'd indicated.

Hunters and mushroom gatherers mostly think they know more than anyone else about absolutely everything; this type of arrogance isn't restricted to Parisians; it's everywhere.

It was a good thing that I knew the mushroom's Latin name, otherwise he'd be dining-out on having met some idiot Englishman in the woods who knew nothing about edible mushrooms; which, here, is a mortal sin.

p.s. 'Lactaires' are nothing special, Lady M doesn't like then, so I never bother to pick any. He was welcome to them.