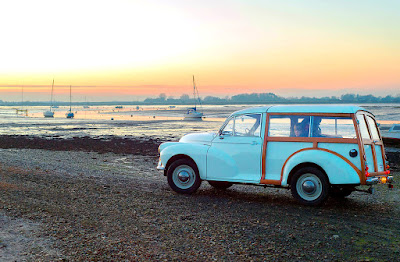 Our first memory of the trip would probably be Father at the wheel, and Mother handing out sandwiches as we 'went for a drive'. We played games to battle against boredom; distances seemed endless, and we probably would have preferred to remain at home.

As we grew we learned how the car worked, and eventually took the wheel ourselves. In time the original driver left us, along with the sandwich maker. Now we drove alone, the car suddenly became a very lonely place.

In time friends joined us, some would be with us for the duration; others would fall by the wayside. Some would abuse our friendship, and would be ejected; others would treat the car as if it was their own, leaving their unwanted detritus strewn around, and damaging the contents. They would show no remorse and would also be asked to leave.

Over the years the car would be changed many times; rather like the travellers. Only a few would remain constant company. We never know at what stage the car will break down or run out of fuel, so we are kind to our fellow passengers; never knowing when we will need their assistance instead of them needing ours.

In time, others will come to take the wheel, and we will wave them goodbye and wish them well. It was good having those few fellow travellers who remained constant friends, and on whom one could depend; they made our lives richer.

As we ourselves depart, we can but hope that the new drivers will also find a few long term travelling partners. Life without them can be tough.