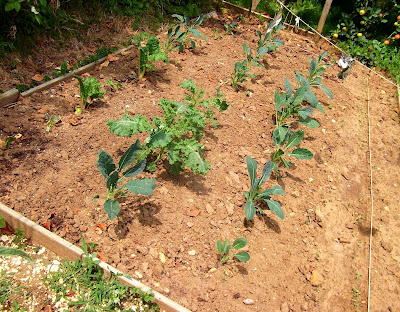 With the way things were going at Haddock's, I feared that we'd have no Winter Greens at the end of this year, and into 2020.

I'm now pleased to see that my Cavolo Nero, Curly Kale, and Swiss Chard plants are all suddenly beginning to grow; there's another row of Chard sown by the string-line. We had some reasonable rain recently, and it seems to have done the trick.

I'd originally sown a row of Perpetual Spinach where the string-line is, and it hadn't germinated, so I re-sowed with Swiss Chard. Now both crops are starting to grow. I should have waited an extra few days.

It's been so dry and hot that nothing was moving. Some plants died and had to be replaced.  There are about 24 plants in all (not counting the Chard/Spinach) which should be enough. Now I simply need to cross my fingers, and hope that nothing more goes wrong. We have two other rows of Chard/Spinach elsewhere, which we are already eating.

The bad photo makes it all look a terrible mess; it's not perfect, but it's neater than it looks, and it recently rained again.