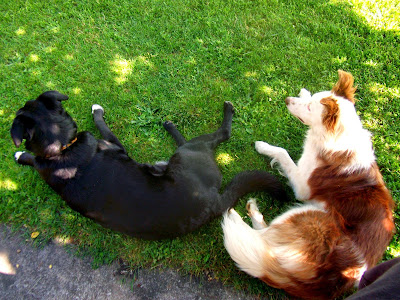 When you live in the countryside, certain animals become as important to you as their human minders; dear Izzy (right above) was one such.

She was a really gentle soul, and Bok (left above) soon noted her charms. They became very good friends, and would spend long relaxed times together.

Not so long ago, Izzy went missing; but almost miraculously after a week away, she was found still within the village bounds. Due to her epilepsy, she had simply forgotten where she lived.

We'll really miss dear Izzy. I've said before on this page that there are some dogs that I far preferred to certain humans. She never behaved badly, was always friendly, and certainly never threatened harm to anyone. Not something I can say about some humans I know.

Izzy died in her sleep two days ago. So, farewell dear girl, I hope that in dog-world there is some place where you all meet up again. I know that both Monty and Bok would love to see you. What larks you'll have.

Our sincere condolences to her family. Adieu.