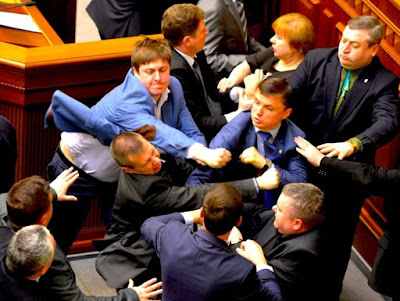 Someone once said 'it's not the name of your political party that counts, but what is right for your country'; and I couldn't agree more.

With most UK political parties in turmoil, our allegiances need to be towards policy rather than the colour of rosette we used to (or still do) wear.

I have always been a 'middle-of-the-road' Conservative voter; neither blindly agreeing with every Tory policy, nor rejecting sensible ideas from the otherwise crazy left. Of course I've always actually voted Conservative, but that was more from fear of the loony alternatives; I'm no luddite; we've all seen what damage they can do.

So, with UK politics (or more the political system) in such a mess, it's difficult to know what one would do in the face of a sudden General Election. Luckily (?) I no longer qualify for a postal vote, but I think I would have abstained anyway.

Dear Caroline (greenie) Lucas has suggested that the country be run by an all female cabinet made up of inter-party MP's; but she was always crazy. One of the more radical of Corbyn's Marxist comrades has suggested going to see The Queen and demanding that The Socialists take over; start building those barricades lads. The schoolgirl leader of the Lib-Dims wants another referendum. And Boris has promised to lock-up more criminals, and ban the use of drugs in prison. Yup; everything is reasonably normal for 'The Silly Season'.

Personally I'd like to sack the whole bloody lot of them, and start again from scratch.