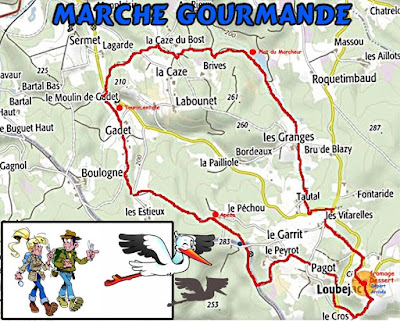 My tiny village gets up to all sorts of activities throughout the year, one of which took place this last Saturday evening.

The 'Marche Gourmande'  is a long night-time walk, peppered with occasional stops for different courses that eventually constitute a complete meal.

The walkers set-off from the church between 7 and 8 pm, and follow a predetermined route through the heavily wooded countryside. Every so often they stop at a farm and consume one part of their meal; then move on to the next.

If you enlarge the map above, you might see what was consumed, and where. First stop was for an apéritif, then a soup in the form of a velouté de choux fleurs, then a plate of charcuterie, followed by an entrecote with haricots verts. Back at the village they continued with some cheese and a dessert, then finished with coffee.

The whole meal was washed down with plenty of red wine, and walkers were advised to take pocket lamps. The route was estimated at about 9 kms long (it looks further to me); I have no idea what time they finished the evening, but I imagine it must have been quite late (and dark).

The early part of the route goes right behind our house, and one small group stopped to ask if I could let them have some string. A lady's sole had completely come away from her hefty walking shoe, and it needed repairing. I found some wide black tape, and did an instant repair for her; I wonder how long it lasted?

On Saturday there must have been about 70-80 walkers. Not really my cup of tea; my dodgy knee would complain too much, but it sounds like fun.