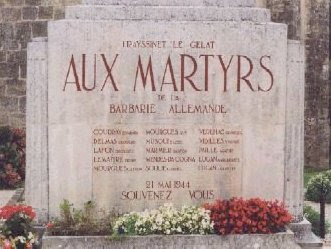 The tiny village of Frayssinet-le-Gelat is where I buy my wonderful bread.

Today it's a very quiet spot, known only for being the birthplace of the man who invented the Jubilee Clip, and the barbaric German wartime slaughter of civilians; to whom we recently paid homage .

The Germans had suspected that the village was the hideout of several resistance fighters, and rather than search for them, decided simply to make an example of the villagers themselves. It was easier, and demonstrated their vile attitude towards basic humanity.

At 5 pm on the 21st May 1944 two divisions of the SS Das Reich, en route for Oradour-sur-Glane (see Wiki), arrived in the village from nearby Villefranche du Périgord. At 6.30 pm they were joined by another division arriving from Fumel.

They assembled everyone in the center of the village, where they proceeded to hang three women, and shoot 11 men. One imagines that they enjoyed watching the women suffer.

So as to not upset the Germans, the monument in memory of those who were murdered was recently changed to say 'Barbarie Nazie' instead of 'Barbarie Allemande', but I prefer to show it as it was originally intended.

The same German troops then moved on to Oradour-sur-Glane, where on the 10th June 1944 they slaughtered 642 villagers. amongst which were 350 women and children; again, all innocent civilians.

The men were all shot in the legs, to make them immobile, then doused with petrol and set alight. One witness discovered a baby that had been 'crucified'.

The Village of Oradour has been left exactly as it was after the atrocities were committed; totally burned-out and ruined.

p.s. Today is also the 2nd anniversary of the Grenfell fire, where 72 people died. RIP all.