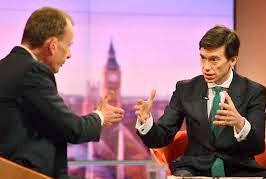 The UK's Andrew Marr Show is essential Sunday morning viewing, and on last Sunday's edition he interviewed Tory PM hopeful, Rory Stewart. Many of you may have seen it.

At one point during the interview Marr 'accused' both Rory and Boris of having been at Eton and Balliol; as if this was something to be ashamed of.

Marr (Loretto and Trinity), who once described himself as a 'raving leftie', seems, like so many Socialists, to have a problem with high achievers, and success; i.e. people like himself.

I find this attitude most odd. If he would really prefer to take any Tom Dick or Harry off a dustcart, and place him in No 10; then say so. Personally I want my Prime Ministers to be as well educated as possible. I want the highest of high achievers.

I really do find it bizarre that there are people who would quite happily see a known Marxist and his cronies in No 10, whilst criticising someone of true intellect; but I suppose that's the state of the crazy UK these days. OK, Boris might have made a few 'interesting' observations about Burka wearers and Watermelons, but that's nothing compared to the appalling language that I hear about him, on a daily basis.

N.B.When, in September 2017, I predicted that Rory would one day become Prime Minister, he was still unknown to most people, and even I didn't think things could advance as fast as they have. I don't think his time will come this year; but give him a couple of years.....