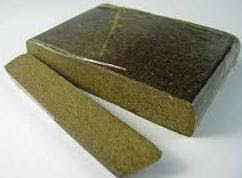 Mr Stephenson has somewhat preempted this posting, but seeing as we both wrote at similar times, I'm posting my version anyway.

I am not a drug user (other than red wine), but it was almost impossible to have gone through living in London in the mid to late 60's, then having spent five years at various Art Colleges, without having tried a few of the illicit products on offer. This must have been much the same for certain politicians.

In those days, the most common, and popular, 'naughtiness' was Hashish; a compressed Cannabis resin (above) that was smoked having been crumbled into Tobacco. Unfortunately I found Hashish far too soporific, and stopped smoking it almost at once; I was missing-out on too much fun.

I wonder what happened to Hashish; its name is hardly ever mentioned these days. Even in Morocco, where it used to be sold openly in the form of government stamped slabs, it is no longer offered either in cafés or on street corners.

Other products around at the time were Acid (LSD), and very occasionally Opium. Purple Hearts were the pills of choice for 'Mod' clubbers.

Drug culture has become the norm these days, with the most unlikely of people regularly consuming a few lines of Cocaine at the weekend (Gove?). Everyone from wealthy City traders to sink-estate no-hopers enjoy (if that is the right word) their regular snorts. Convicted Drug-Drivers have now overtaken the number of Drink-Drivers. Synthetic drugs are everywhere, and they become more inventive and numerous by the day.

There are those who wish to legalise the whole drug arena; they suggest it would rid the country of dealers. Others wish to take a much harder line, and throw both dealers and users into prison indefinitely. In either case the use of drugs has become an openly everyday occurrence, and is having a profound effect on the world's criminality, mental health, and economy.

Much of our present day drug/crime/sex/corruption parallels can be compared to the Decline and Fall of the Roman Empire, and one can but wonder what modern day Odoacer will replace a latter day Romulus when Gibbon's opus is rewritten.

Personally I think the decline is already well advanced. Everything seems to be going wrong, and the strict morals of yesterday have become the new liberalism of today. Much of that is OK (desired even), but there are too many unwelcome side issues that will probably bring us all down; drugs being one!