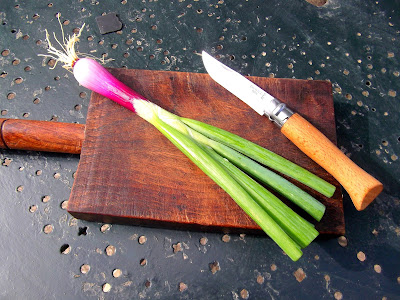 It is often said (by gardeners who know what they're talking about) that one should begin harvesting your veg' as soon as it becomes edible.

I tend to ignore this advice, as I like to see things grow to a reasonable size before tucking-in.

My last year's Red Onion crop is a good example. I hardly touched a single Onion before they were fully grown and harvested, then at the end of this last Winter I threw away several kilos that had gone bad.

This year I plan to take the advice, and have already started to harvest Onions, Courgettes, and Spinach, all of which would normally be regarded as far too young to eat.

In about a week's time I will also have Caulis, Cabbages, and Broccoli, all of which will look as if they've come direct from the 'Mini Veg' department at Waitrose; but without the air-miles. Trendy, or what!