Another letter to Harry. 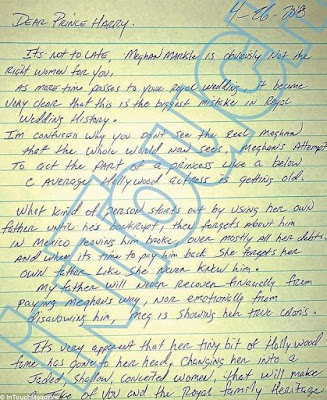 I have just seen this letter from Meghan's half brother. Thomas Markle jnr, obviously knows his sister far better than most, but I don't think most of us would describe your fiancé as 'a jaded, shallow, and conceited woman'.

She has a pleasant smile, and that is quite important; but, is it really enough on which to base a marriage?

Small time actresses are notably self-centred, and you will have to restrain her from becoming the classic 'Pushy Princess'. The Queen Mother warned your mother about this, and as we all know (to her disadvantage) she ignored the advice.

Do try to stop Meghan from appearing in magazines, grabbing the limelight, or becoming a patron of spurious charities; these things turn susceptible heads, and can only hasten ill feeling from 'her adoring public' (if she has one).

If the press ever start describing her as 'The most beautiful woman in the world' (as they so often did with your late mother), then you really will have cause for concern. I don't wish to comment on the 'attractiveness' of either your mother or Ms Markle, but I'm sure you understand how well-intentioned exaggeration can easily have adverse effects.

Many thanks for the invite; don't get too pissed on your Stag Night. I'll be in touch!