I'm not here to defend or even attack hunting, just to present you with some figures.

It has now been announced that here in Périgord this winter's hunting season will be between 9 September, and 28 February.

The hunting authorities in our particular area have also given guidance as to the number of animals that can be shot.

I'd never previously thought about the numbers of wild animals that were shot each year; it seems a lot.

Périgord is just one of about 95 similarly sized départments (counties) in France. I don't imagine that all have the same wildlife problems that we have, but even if half do (and they shoot the same amount) that's an awful lot of Deer and Boar. 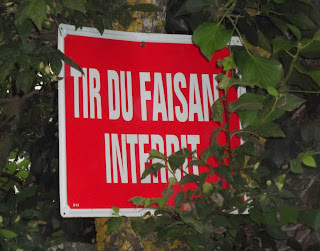 p.s. I no longer hunt, but I would like to make a plea to those who do. Please would you refrain from shooting any Pheasants or Red Deer for at least the next five years. Red Deer are such wonderful animals, and are becoming quite rare. In the UK Pheasants are regular garden birds, and I'd love to see that becoming the case here too. A simple five year amnesty would help them enormously.