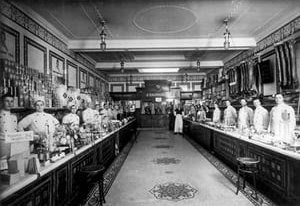 Sainsbury's has been in the news recently; It must be the oldest supermarket chain that I can remember from my childhood.

We lived in Lingfield in Surrey; just south of London. The village had everything you needed, but none of the big national stores. When my mother was feeling adventurous we would head off to East Grinstead, about 10 miles away, where there was a cinema, swimming pool, hospital, and (best of all) a Sainsbury's.

It was just like the above photo (they all were); a central aisle, with the counters running down either side. The assistants were all dressed like 'chefs', and they sold the most exotic of foods (exotic to us, anyway). There were always convenient chairs for the weary.

I can remember going to the cinema with my sister and buying slices of Pork Pie, and Celery from Sainsbury's, to eat during the film. I suppose we treated it like an early 'takeaway'.

Now Sainsbury's is to join forces with Asda (Associated Dairies) to form the largest UK chain of food stores; bigger even than Tesco. I wish them luck; especially as Lady M is a shareholder.