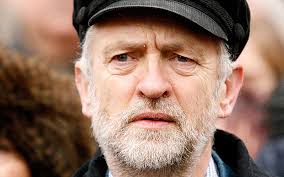 With the very welcome news of a new 'Centrist Party' being founded in the UK, it looks as if  the hard left could soon be sidelined.

The Russian KGB called Corbyn's hero, Anthony Wedgwood-Benn, 'the most dangerous man in Europe' and an 'unnecessary simpleton', and Lord Sugar has now described Corbyn himself as 'Absolutely dangerous'. Even dear Boris has recently called him 'The Kremlin's useful idiot'. Sugar has advised the Labour Party to be rid of Jeremy 'as soon as possible'.

Personally I'm not as worried about him as I was. I'm pretty sure he's a spent force. The only people who could tip the balance to have him elected as PM, are those gullible students who previously believed all his tripe about no university fees, and a return to grants; but I don't think they'll be as easily taken-in the next time around!

However, he mustn't be ignored; Corbyn has presented an extremely serious threat to UK Plc. He has taken the usual Socialist 'Tax and Spend' policies way too far, and a return to a Bankrupt Britain would certainly have been on the cards. I shall heave a huge sigh of relief when he returns to the back benches, where his peculiar version of Marxism really belongs.

I wonder who'll replace him? The most important thing will be for the Socialists to distance themselves from the 'Momentum' group of hard left loonies; as well as making a really serious shake-up of their front bench.

Maybe Anthony Wedgwood-Benn's son Hilary could be called upon; I can assure you he's nowhere near as extreme as his late Dad. But who knows, maybe Hilary will jump ship, and join the no-hope Centrists; in which case they could 'almost' stand a chance!