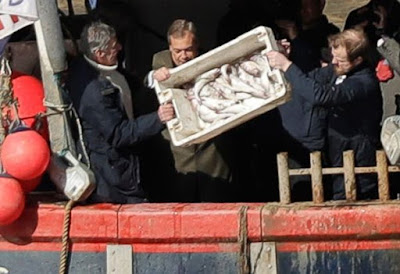 Nigel Farage came into some criticism recently from certain fair-weather urban 'environmentalists' after his Thames fish-dumping spectacle. They should, in fact, have thanked him profusely for raising the issue; after all, it is what they claim to expound!

This isn't because the fish are not wanted. When sorted, certain fish are designated slightly 'too small', and must be discarded. But if they've been caught anyway, and are already dead, then why not eat what is perfectly good food rather than throwing it away. Go to any fish restaurant in mainland Europe, and you will find undersize fish on the menu; why is it that only the UK follows EU rules to the letter?

Farage is right to highlight this stupidity (he's right about many things), I hope that when we quit the EU that this fishing nonsense will be rectified. Even if the 25% was used as fish-meal, it would be better than the current irresponsible waste.

Three trawls where everything is used, must surely be far better for fish stocks than four trawls with a quarter thrown back dead.