The changing face of colour. 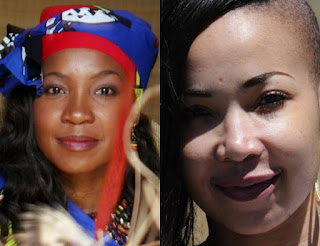 What a lot of fuss is made over Black Face Minstrels, Gollies, Robertson jam figures, or certain Morris dancers; even a UK fundraising Carnival Float recently came under fire after depicting the Jamaican Bobsled Team from the film 'Cool Runnings'. None of these people are being discourteous to people with darker skin, just depicting something different to themselves for a bit of fun.

So I was quite surprised to hear that absolutely no fuss has been made of people who artificially try to LIGHTEN their natural skin colour. WHY NOT, one has to ask? (Think Michael Jackson, et al)

Is is simply because it's OK to complain in one tonal direction, but not in the other?

Above is just one photo from a skin lightening product advert; there were plenty of others. The net is filled will such products, all proudly claiming to whiten skin.

If it's 'racist' to 'black-up', surely it has also to be 'racist' to 'whiten-up'. Personally I think that neither is 'racist', but one can't be seen to be hypocritical. Therefore I wish to complain most vigorously about these racist 'whitening' products. I insist they must be removed from the market.

Does that sound as stupid to you, as it does to me? Good!