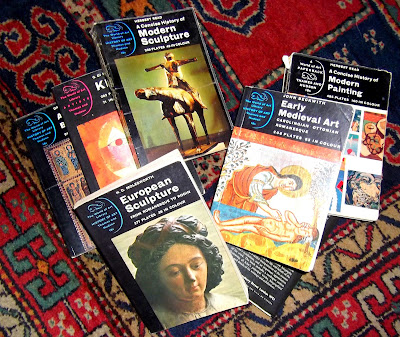 When I was a wee lad of just 14, you may be surprised to learn that I became a Latin Scholar. Somehow in my school entrance exam I'd managed to score the highest marks in the Latin paper of my entry year; a staggering 90%.

Attached to the kudos of being a Latin Scholar was an annual bursary of 13 guineas which had to be spent on books. It was also part of the deal that I wrote an annual letter to the bursary committee about which books had been chosen, along with a reasonable critique; about 1000 words was enough.

My Latin studies didn't last for too long. My new teacher was tedious, and made the study of Latin a total bore rather than a pleasure. However my bursary continued for my full 4 years at school.

There was never a question in my mind as to what type of books I would purchase; they HAD to be books about Painting or Sculpture, and the best bet for someone like myself (at that time) were the Thames and Hudson 'World of Art' paperback publications that were very popular, and cheap.

It must be said that the illustrations were very poor, but they gave a general idea.

I have no idea how many books I bought over the four years, but the bookshelf in my study became stuffed with them; friends borrowed them at such a rate that I was obliged to use a Lending Library style system to keep track of who had what.

I only have a dozen or so here in France, the others are in boxes back in England. I still look at them occasionally, although with Google now at my fingertips, referring to them has become rare.

I would never get rid of them. They are like old friends!