I've previously mentioned that a relative 'newcomer' neighbour had applied for, and was granted, permission to build a small holiday village right bang in the middle of our tiny hamlet. He wished to install 5 semi-buried converted old shipping containers.

Quite naturally all the surrounding neighbours complained; we were horrified at such an idea. No-one had been consulted, or informed, and the first we knew of the project was when he began digging huge holes in his field.

We consulted a lawyer. Letters were written to the Mayor, and to the planning authorities. 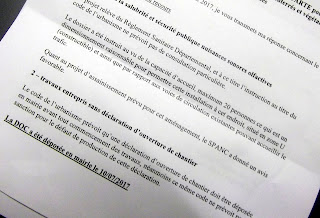 We have now just received their reply (above) which states that everything is in order, and the planning permission stands. But that was hardly the point; they have totally ignored the wishes of the neighbours, or even the devious ways in which matters were handled. 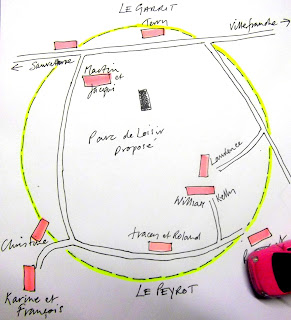 Above is a rough idea of how the neighbours surround the proposed holiday park. Our house is under the toy car (bottom right). Where is says Parc de Loisir Proposé is the area where he intends to install the 5 old shipping containers; these will house a maximum of 20 holiday makers. He also has a Gite which houses another 7.

What was once a haven of architectural beauty, and bucolic tranquility (the reason why we all bought our homes here), is soon to become a noisy holiday camp.

In the above letter it states that the containers must be buried, covered with 'vegetation', and any bits left showing must be disguised with wooden cladding. The whole area must also be surrounded by hedging. In other words the authorities perfectly understand how pig-ugly it will be, and he must do his best to hide them from the rest of us. That's as far as their recommendations go.

No consideration has been given to the fact that our tiny hamlet is composed of very beautiful ancient vernacular stone-built houses. As far as we are all concerned, his project is an eyesore. OK, we may have lost Round 1, but we ain't finished!

Personally I have gone overboard to ensure that all my building work is in harmony with local style, and that materials used are sourced from locals artisans. Then along comes someone who totally ignores such things. It makes me wonder why I bloody bothered.

As usual I mention no names in such circumstances, but I am very tempted to do so. We are all fucking annoyed!