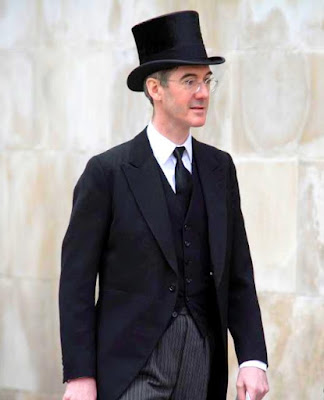 Following on from yesterday's page; I doubt if it will happen, but this man keeps being being touted as a future British PM.

Over the recent Summer months Rees-Mogg has gone from obscure backbencher to front page news. Ever since he named his sixth child 'Sixtus', he has been called both a 'toff from a bygone age', and the 'hope for a Greater Britain'; depending on what colour of newspaper you read.

I'm afraid I know very little of our Jacob. He received an upper 2nd in History from Trinity Oxford, he drives a 1936 3.5 T Series Bentley, and he's a supporter of Somerset Cricket Club. He is also anti same-sex marriage, and anti abortion, which doesn't win him many friends. His superior educational credentials would also rule him out from being admired by anyone to the left of centre.

His first foray into politics was in 1997 when he contested the Scottish constituency of Central Fife, where he carried out his canvassing accompanied by his nanny. It was said at the time that Rees-Mogg couldn't understand a single word of the local broad Scottish accents; nor could they understand him. He was not elected!

A future PM? Probably not, but he'd be a lot of fun as a future Mr Speaker!