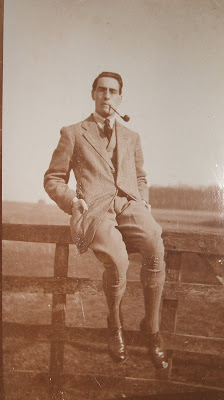 My Uncle Reginald (Father's older brother, above) was sent off to The Colonies to grow, and send back, Tea.

He went to Ceylon (Sri Lanka) where I imagine he did fulfil his remit, although I never heard much about Tea.

What I did hear, however, was of him sending back wooden crates filled with Furs to my father in London, with instructions about who to sell them to, etc.

He also sent back small packages of precious stones, one of which he gave to my father (Uncle R was later repatriated with a nasty dose of Paratyphoid).

The stone he offered was quite a large Ceylon Sapphire which Father had set in gold as a ring. It had finger-like clasps around the stone itself, and was/is a very pleasant piece of jewellery.

In the early 1960's my sister asked her mother if she could borrow it for an upcoming holiday to the Italian Riviera. Somewhere between Paris and the South of France, my sister's suitcase went missing, and we all panicked; simply on account of the ring. The guards were alerted, and a thorough search ensued. Eventually her suitcase was found, untouched, in a guards-van right at the very end of the train. The ring was safe.

Having come to me, sometime after the mid 80's one of the gold 'fingers' broke, and it was taken to a jewellers' for repair and re-polishing. The jeweller also offered a free valuation, which rather surprised us.

The ring is now in Australia, having been given to my daughter Tenpin. I wonder what will happen to it in the future? I hope that a wife of either George or Finn's will wear it, and that it will continue down the line. It's not the most valuable thing in the world, but, rather like our 1735 grandfather clock, it's a pukka heirloom; and we don't have many.