I'm not sure if this story is true, but it purports to be.

Previous to the 100 years war (1337-1453), Bastide towns had been built across S W France; usually around 1270-ish. Some were English built; others French. As you can imagine there was much rivalry between them.

At some time, the young men of Villefranche-du-Périgord (my nearest small town, above) decided to go raping, killing, and pillaging, in the rival town of Monpazier (about 30 kms away, below). 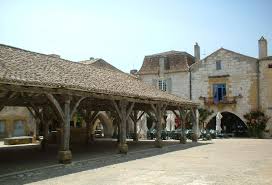 On arrival at their destinations they found the two towns empty, other than a few women and children. They stole a few things, probably scrawled a few rude words on the walls, and had their evil ways with the women. This done, they probably had a few drinks, then both gangs headed for home.

History tells us that each 'army' took the shortest route back to their respective towns, and fate dictated that they met half way.

By this time they were in no further mood for a fight, so they probably had a picnic together, and agreed to do their fighting another day.

As I said above, I don't know if this story is true, but I certainly hope it is.

N.B. Villefranche was a French Bastide, and Monpazier English. These days Villefranche is a rather lacklustre town, whereas Monpazier is very tourist orientated and buzzing with activity. Both are worth a visit.