The Long and the Short of Prongs. 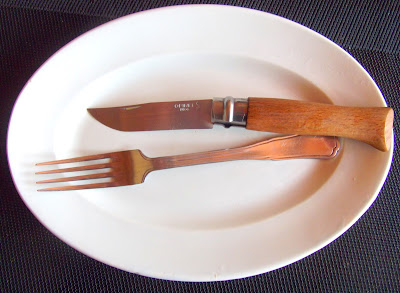 Wills thinks that the prongs on our 'daily usage' forks (above) are too long. I have no idea how he came across this interesting observation, but he was most adamant.

I suggested that there was not (as yet) a European standard length for fork prongs, and maybe he could do some research into the subject. Maybe if he came to some firm conclusions he could then submit his findings to the 'European Fork Prong Length Politburo', and they would look into the matter.

In the meanwhile I did offer to cut down a fork for him, but he's still undecided as to the perfect length. Maybe I should make several all of differing lengths, and he could make his own choice.

Personally I've always rather liked 3 pronged forks; but that's a whole other can of worms.