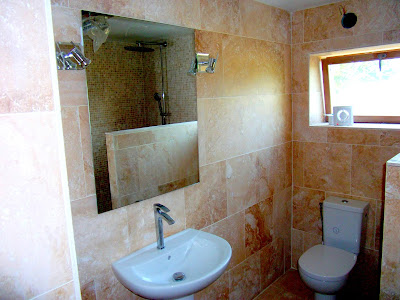 The downstairs bathroom, at the barn, is now finished and is serviceable; although we'll probably change the hand basin tap; it's not right, is it. The hole above the window is for an extractor fan, which has since been installed.

The bog flushes, there is hot (solar heated) water in the taps, and the lovely big shower-head has fulfilled all its promises. 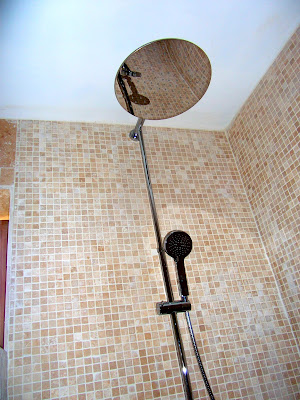 The main bathroom will be bigger and more luxurious, but we're leaving that one until after summer.

In case you were wondering, the stone tiles and mosaics we used are Travertine; as employed to build The Colosseum (and all other major buildings) in Rome.

The next major job is to buy and fit all the kitchen units. We've done the plans, all that's now needed is to pop down to Ikea in Toulouse, select the stuff they want, and put it all together.

Kellogg's mother, sister, and brother are flying over from Sweden in a week's time, so whilst en route to the airport Wills and Kellogg will visit the Ikea store to make their choice.

Otherwise, the only other barn excitement is that they now have push-button ice cubes from the fancy new fridge.

Of course the work is still nowhere near completed, but Wills and Kellogg decided to move in last night. The electrical supply will be turned-on on Thursday. All very exciting for them.

Me? I'm still bloody plastering. Will it ever end!