There is one expression in the UK that is of paramount importance when asking for planning permission for either restoring an old house, or changing the use of an existing agricultural (or other) building to domestic use.... That is, to 'CONSERVE THE INTEGRITY OF THE BUILDING'.

Strangely, here in France, it seems to be the opposite.

Back in about 1978 when I asked for planning permission to restore and extend a tiny ruined cottage (built circa 1750) where we now live, I was told that when finished the whole building must be cement rendered. To me this spelt no less than architectural assassination; and I ignored their instruction. The idea of covering over beautiful ancient weathered stone walls with concrete was just plain madness.

But the French themselves love to take an old building and make it look new. They will start with a 'picture postcard cottage' and change it into something modern. In fact they are often ordered to do so as part of their planning application.

I don't wish to sound as if I know best, because I don't; but as a designer/artist I do understand a bit about aesthetics.

Take this as an example. One of our neighbours is doing much as we are, and is converting an old Tobacco drying barn into a house, but where we are trying (with difficulty) to preserve as much of the original look of the building as possible, she has hidden all reference to both the original use of the building and its mighty structure. The old barn has already been re-clad  with synthetic boards, and I believe that all the interior beams etc will eventually be hidden. Again I don't wish to say that she is wrong and we are right, but just to point-out the difference between the two cultures. Such practices in the UK would be totally outlawed. 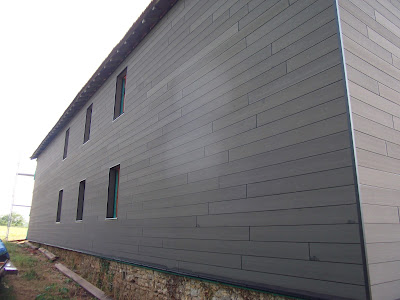 Personally I'm of the opinion that certain finishes are more appropriate to an industrial estate, than on the exterior of an old séchoir à tabac; but who am I to dictate. For a brand new-Eco build they would look fine; for a restoration project, not.

It really is no exaggeration to say that without the Brits and the Dutch, much of the beautiful old French vernacular architecture would have been lost.... We like to preserve it; for some reason, they are not so concerned.