Of all the 7 deadly sins, my favourite must be Envy.

I have no shame in occasionally being envious of others, especially when it comes to architecture.

There are several periods of English architecture which count amongst my, and most Englishmen's, favourites.... Tudor, Elizabethan, and probably the most popular, Georgian.

My own preference is for Elizabethan architecture (1550-1600 aprox), with Sissinghurst being one of the best domestic examples. 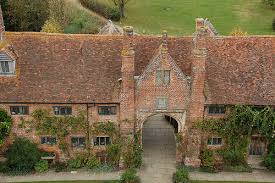 Sissinghurst was famously bought in 1930 by gardener Vita Sackville-West and her diplomat husband Harold Nicholson. It was almost in ruin when they purchased the house, and they spent years restoring and redesigning both it, and the garden.

The stone mullioned windows, coupled with mellow bricks and tiles, give the house (castle) a warmth that has never since been paralleled in English architecture.

Inside every (well, almost every) Englishman/woman lies dreams of an Elizabethan manor/farmhouse. There are two problems here; there probably aren't enough to go round, and most of us couldn't afford them anyway. Still, we can always dream.