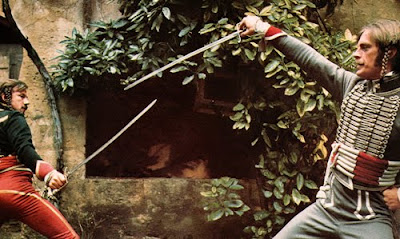 It's possible that you have, unwittingly, seen me in various films; but always as some anonymous 'extra talent'.

The one I probably enjoyed making the most was 'The Duallists'. It was directed by Ridley Scott, and starred Keith Carradine, Harvey Keitel, plus a few other famous 'also-ran' names.

But it wasn't the acting side of things that appealed to me so much; it was the history, the fabulous uniforms, and the whole bravado-business of fighting duels.

Dressed, as I was, in full Napoleonic-era officer's kit, with my moustache waxed in a jaunty fashion, I could easily have seen myself duelling over some fair maiden's honour. At the time I even imagined myself being run through with a sword and dying on some frosty meadow in the bloom of my youth, and strangely the idea seemed quite appealing.

This wasn't some odd-ball death wish, more a romantic vision of life and death; at the time it seemed a far better option than croaking in some dirty geriatric ward in Barnsley or Wigan (not that I've visited either town).

Maybe they should bring back duelling; for the elderly, of course.